First you need to enable virtualization in your UEFI settings. For Intel system it usually is called VT-x and for passthrough VT-d.

But I am running AMD, this is my hardware

This is my UEFI settings

SVM and Iommu is to enable virtualization and passthrough, should exist on most AMD motherboards. The extra options AES and AER Cap is for the UEFI to isolate your hardware into separate iommu groups, I did not have those settings or similar settings on my old MSI B450 Mortar Max motherboard.

Modern operating system is running your software in the virtual layer (this has nothing to do with virtualization) and all your hardware are accessed through the Virtual address space. 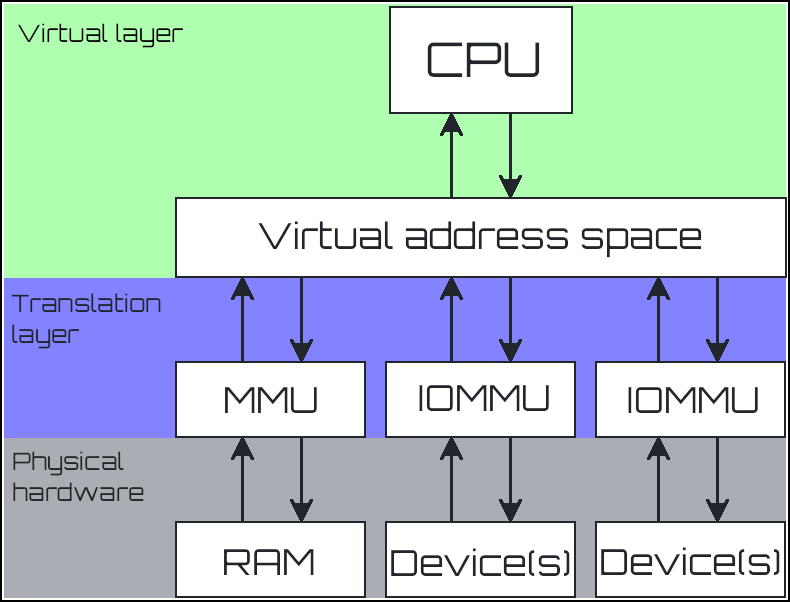 But the physical hardware must know exactly what physical address the CPU actually wants to access. That is where the MMU - Memory Management Unit comes into play. The MMU is mapping the virtual addresses into the physical RAM addresses.

But there are some limitations to this, and this is why I wrote a bit about iommu groups. Multiple devices can be managed by one iommu, but they now exist in the same iommu group. The passthrough features cannot passthrough a part of an iommu group, thats why iommu groups are important.

But this can be bypassed by using the ACS patch in your Linux kernel. Very useful for homelab hacking an playing around. But I would not recommend to use it in a production enviromnent.

This script is from Arch WIKI - PCI passthrough via OVMF.

To much of the theoretical stuff, lets add some physical hardware to our Windows 11 virtual machine.

Start by opening (not starting) the virtual machine 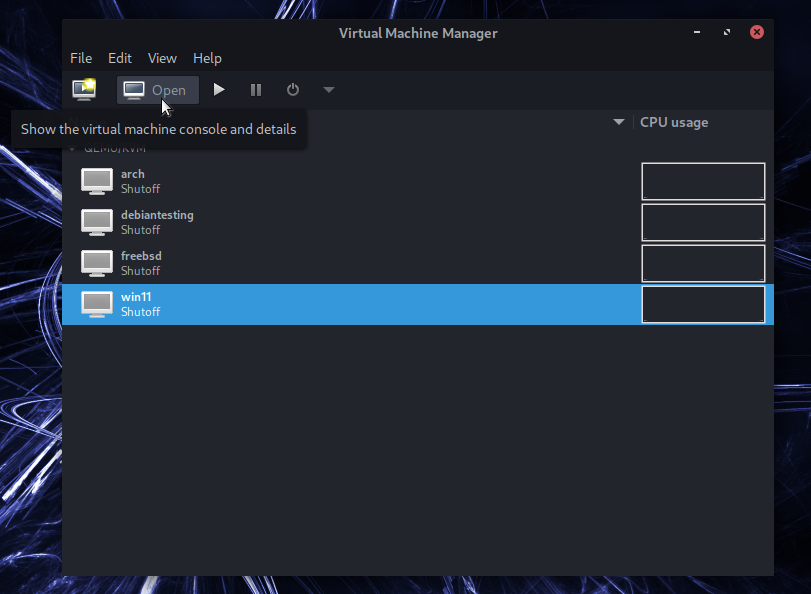 Next step is to show virtual hardware details 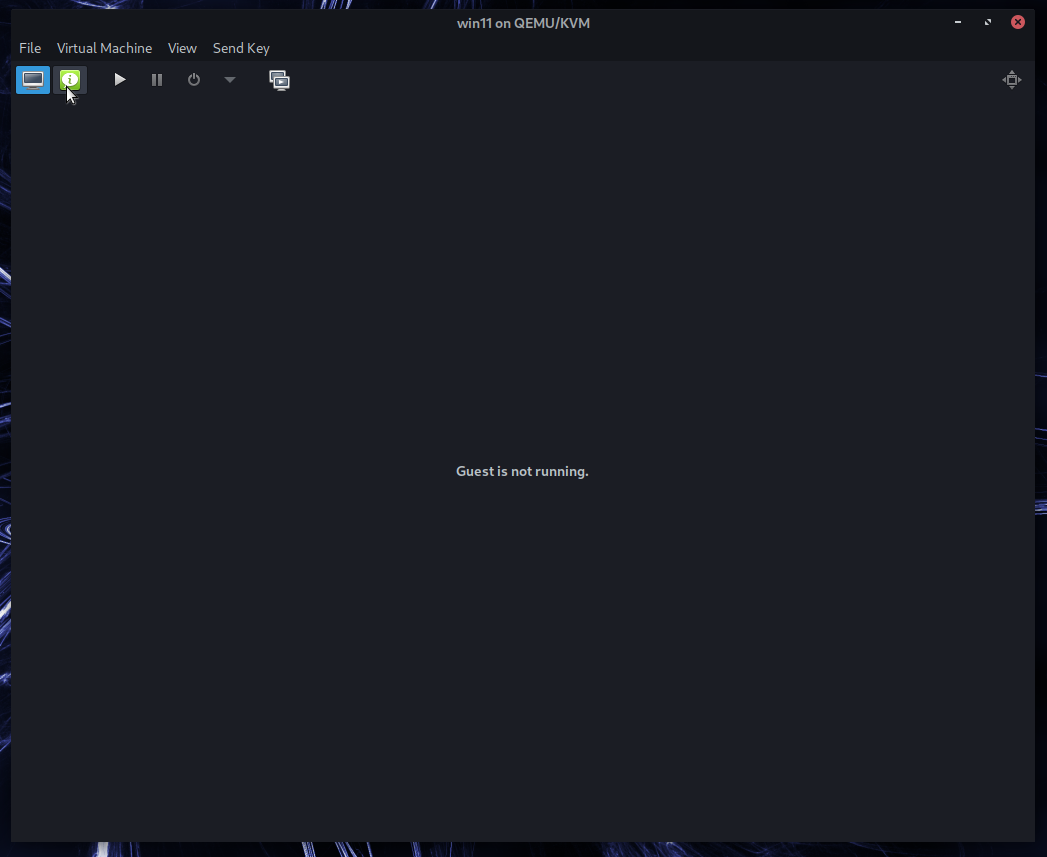 Now this is the virtual machine's virtual hardware, click Add Hardware in the bottom left corner 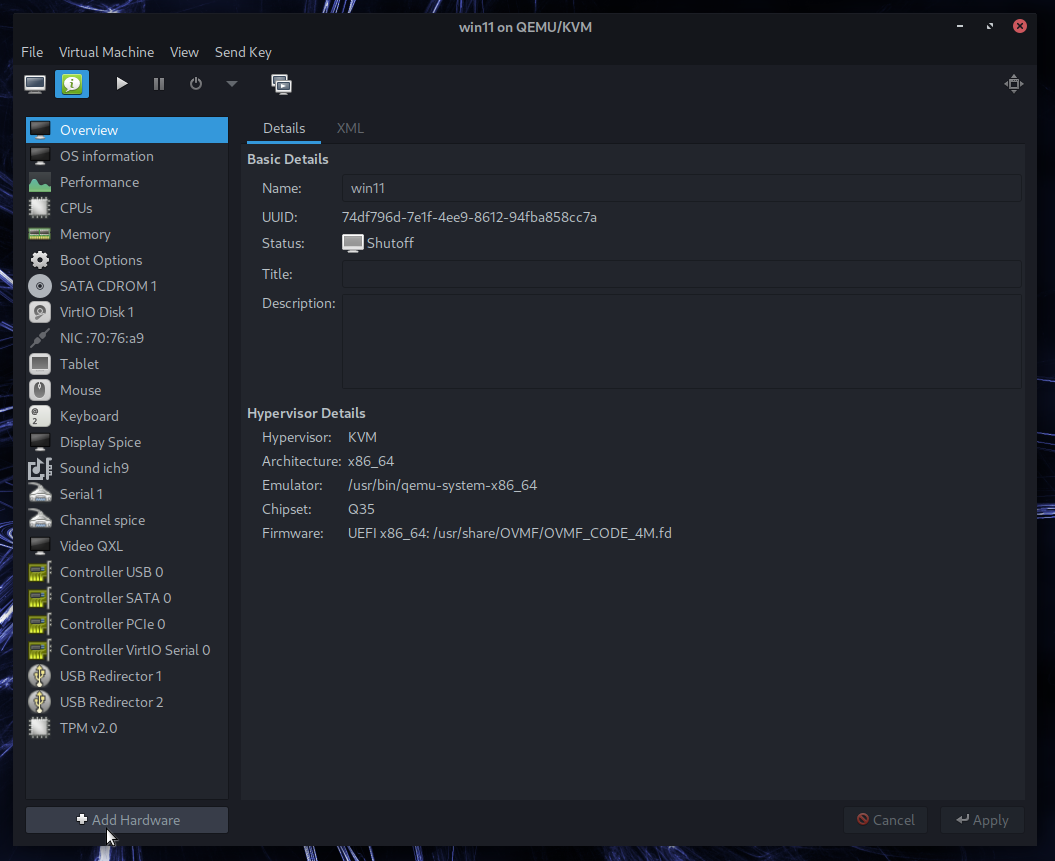 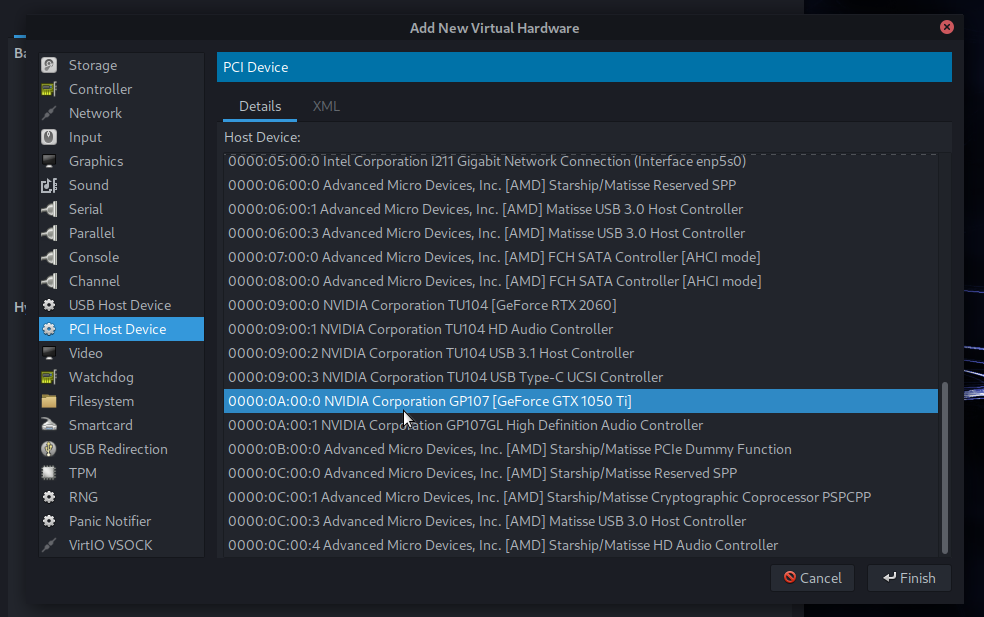 My GTX 1050ti has built-in audio device for audio through the HDMI connector, this device has to be passed through as well. 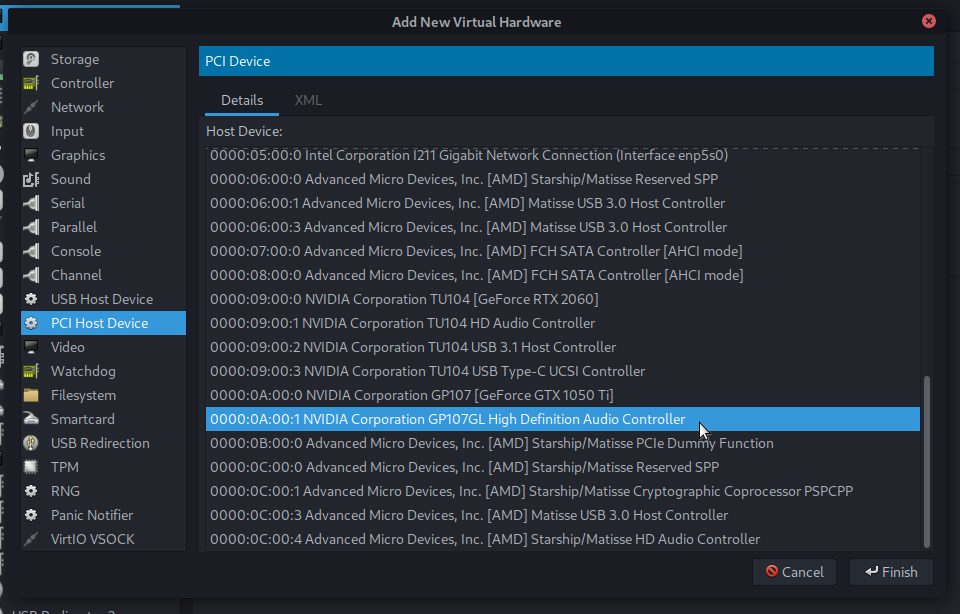 If you have more sub-devices for your GPU you need to repeat the process for all of them. For example my RTX2060 have 3 sub devices. Usually the sub-devices is in the same device address space XXXX:XX:XX.n where only n is different for sub-devices.

Now add mouse and keyboard, I have a second setup of mouse, keyboard and monitor to use for my virtual machines. I would recommend to passthrough an USB host controller though, this way you can plug and unplug USB devices to your virtual machine. 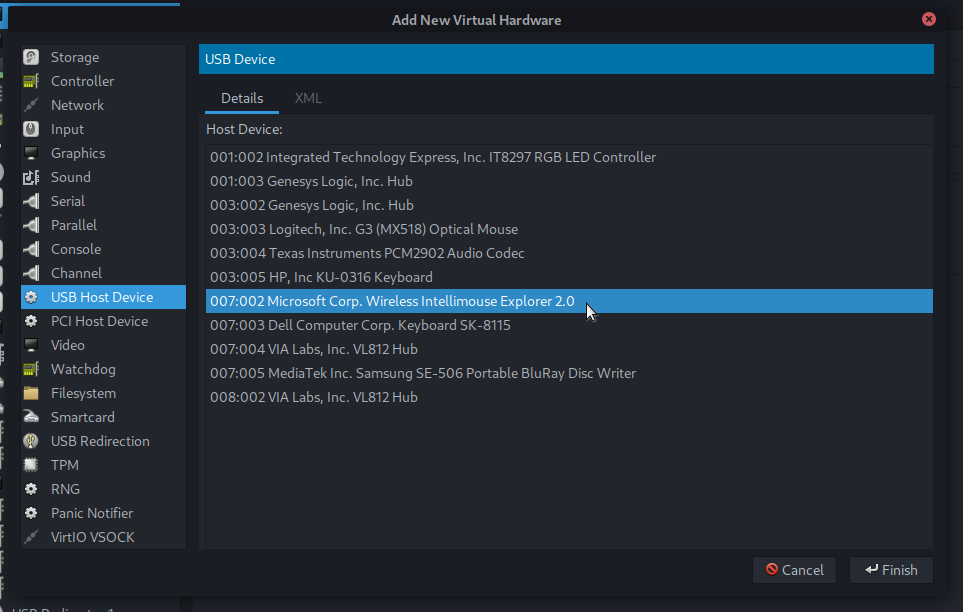 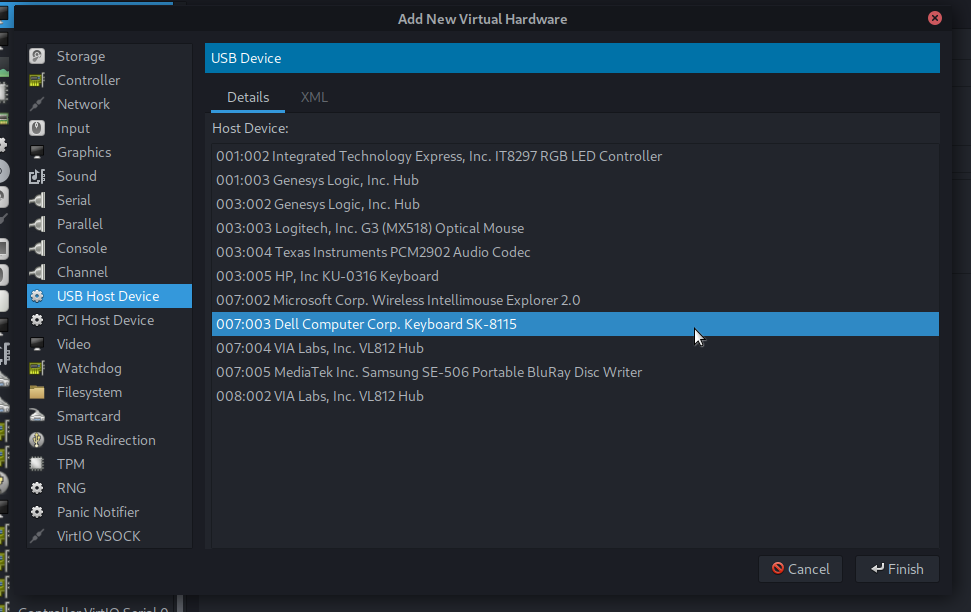 We have now added our GPU for passthrough to the virtual machine. But if we start the machine it will still be running in a window with the dedicated GPU as a secondary GPU. So lets remove the virtual hardware we no longer need 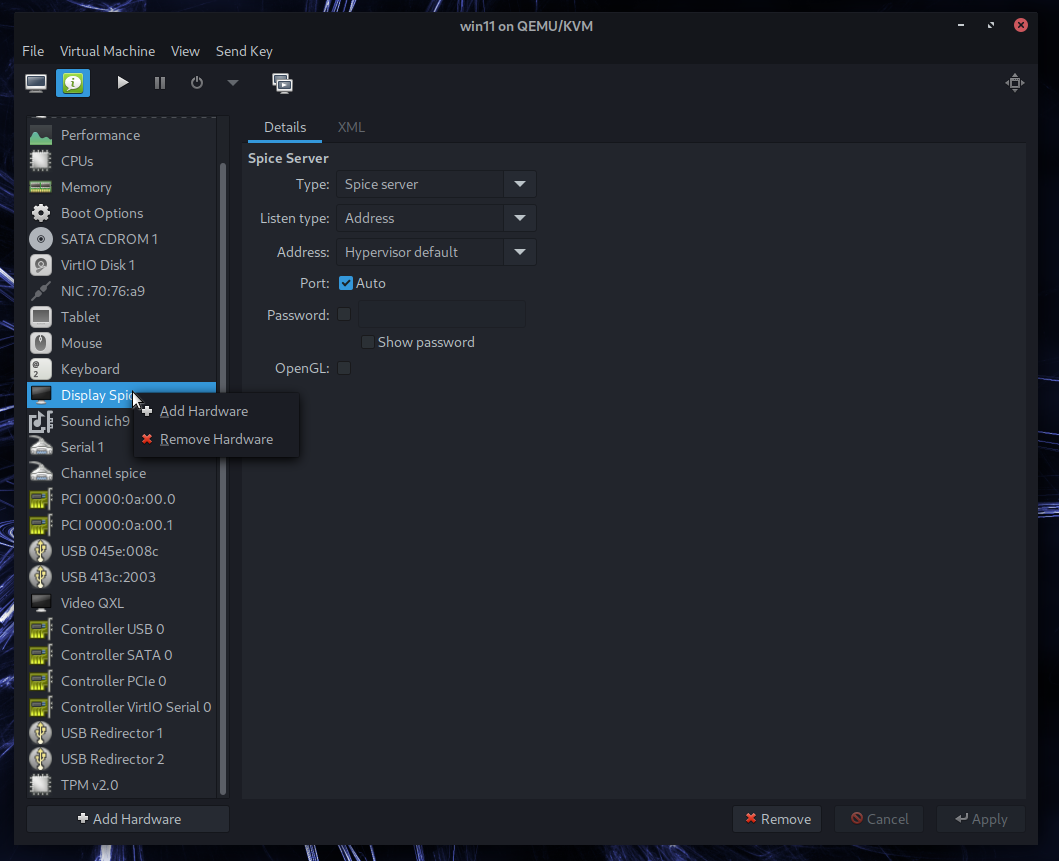 And the virtual sound hardware, I am using the audio from the HDMI cable. But you can use an USB sound card. It is possible to route the sound back to the host using pulseadio, I have tried it but with lots of issues. 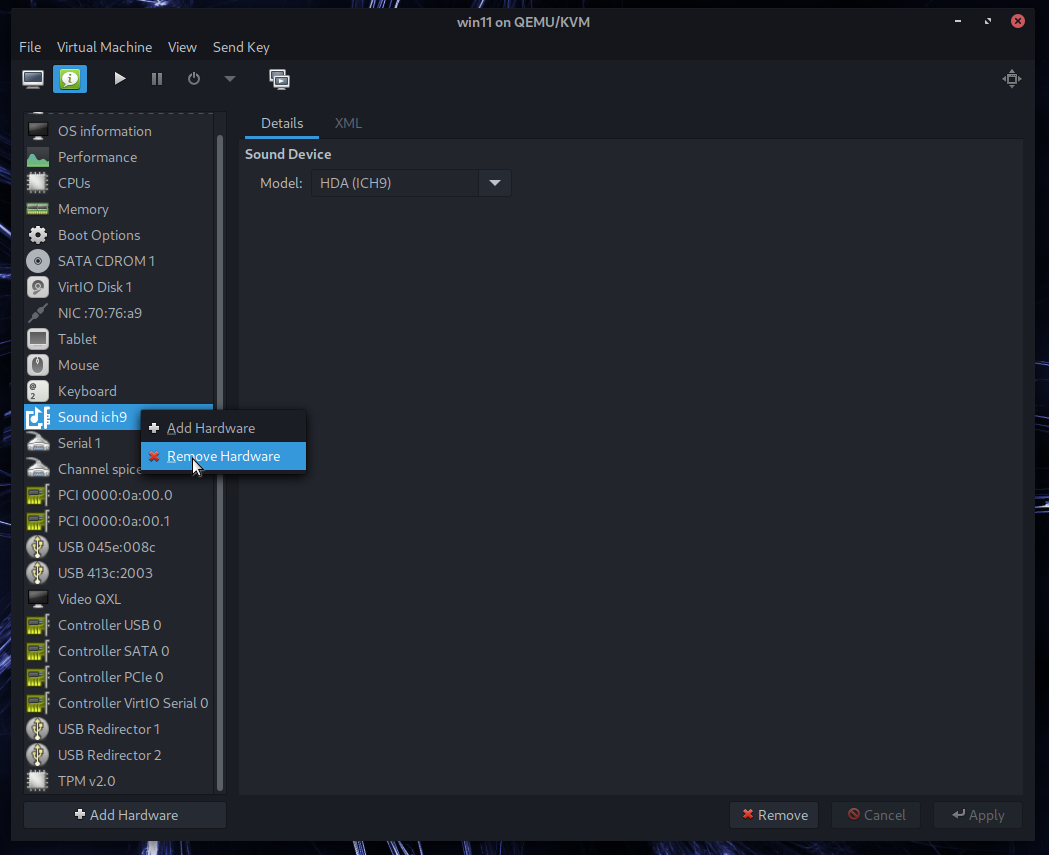 And then we remove Video QXL, the virtual graphics card. 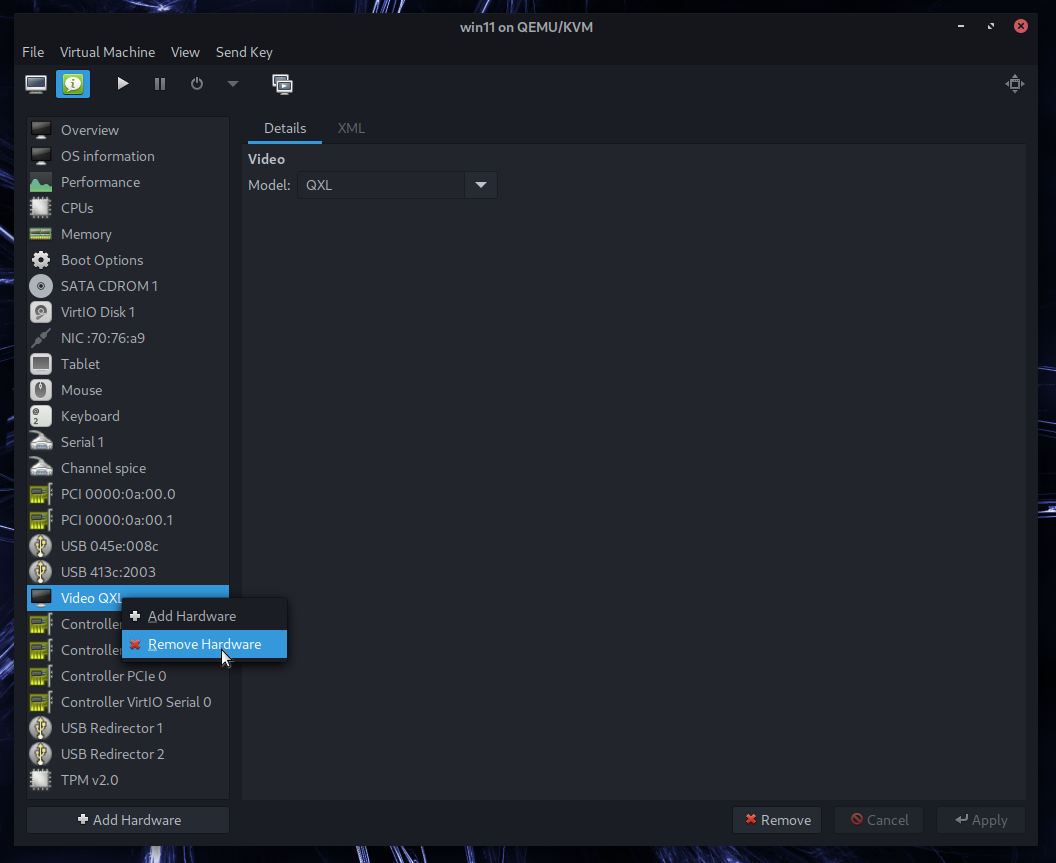 I don't know if it is needed, but I'm removing Tablet, Serial 1 and Channel spice as well.